People at the Border Need Our Prayers and Our Support 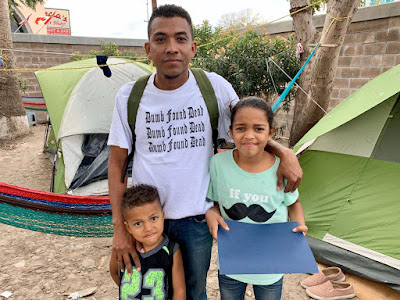 Mario has now lived in a tent with his 4 year old son Steven and his 9 year old daughter Belen for six months. They are lovely people from Honduras seeking asylum but have been stuck at the border since August. His wife and eldest daughter are in Dallas, also awaiting an asylum hearing. They crossed just before the Migrant Protection Protocols were instituted. Mario and his younger two children came just after. His second court date will be February 14. His wife’s is Feb 23 in Dallas.

It has been a challenging time at the border. When Mario first arrived in August, there were maybe 200 people there. Now there are nearly 3,000. These people are at the mercy of humanitarian workers, most of them coming from Team Bronzeville. 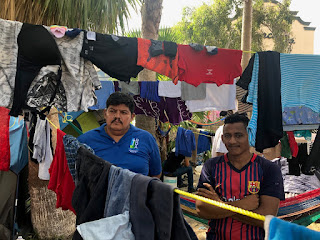 When I met Mario, I also met several of the people who live in tents in his immediate area. They were from not only Honduras but also Nicaragua, El Salvador, and Guatemala. These people who arrived at about the same time have been a community to one another, providing security in numbers. But it hasn’t been easy. His children can’t attend school. They get some lessons from volunteers who come over the border on weekends.

In December, nine year old Belen got so sick with a respiratory infection that she ended up in the hospital. It shouldn’t be any surprise since her home is a small tent laid out on concrete pushed up against other tents. When it rains hard, the tent floods because there is nowhere for the water to go but collect. It has been a nightmare for Mario and his family. And yet he expresses deep gratitude for the care and the attention he has received from humanitarian workers. He constantly names his blessings. 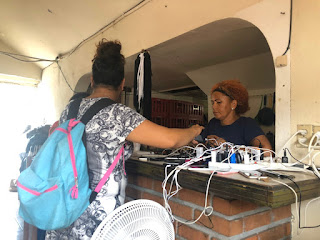 I know these things because I helped him get a phone and I’ve remained in touch through WhatsApp. But it costs 10 pesos (55 cents) to charge a phone for an hour at the nearby little store. Sheer extortion. It costs the same if you wish to use a toilet in one of the nearby restaurants. Otherwise there are five port-a-potties that serve what is now nearly three thousand people camped out right across the border from the United States.

The power of telling his story and others has resulted in generosity. A friend of mine said, “Have you considered giving Mario a solar-powered charger?” And then that friend said, “Take mine—I will get another one.” But there’s generosity on a much larger scale as well now that This American Life and 60 Minutes have broadcast their own stories: Team Brownsville is the humanitarian organization that is heroically helping as many of the migrants as they are able. They serve two meals a day and they are creating a clean water system for the area. It costs $50,000 and now they have the money in hand. Their current projects are at their website here. Please take a look and consider whether you’d like to be of support. 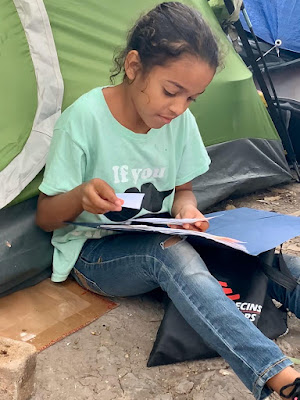 When immigration activist Betty Alzamora returned to Matamoros, she gladly took with her a few gifts from me and our congregation at Unity Temple. From the congregation she brought cards/letters that were created by children in the religious education program at Unity Temple. It brought tears to my eyes to see Betty’s photo of Belen looking at these cards, holding the blue binder that I and others here have held in our hands. Belen was charged to give out the cards to other children, though many of the children she has known have left. Their parents have sent them across the Rio Grande in hopes that they may know a better life than what they believe they can provide for them. Truly heartbreaking.

In November, Illinois State Representative Lisa Menendez introduced a House Resolution calling upon the Illinois U.S. Representatives and the U.S. Congress to end the Migrant Protection Protocols that has created this crisis and to defund ICE. I joined Mony Ruiz Velasco in testifying in support of this important resolution—and it passed! When the federal budget came up, it included increases for ICE and the border patrol, not less. A few brave representatives opposed the budget for this reason. But even my U.S. Representative, Danny Davis, voted for it. There is still a lot of organizing to be done.

I keep the people on the border in my prayers and encourage you to do the same. But don’t just pray, share the stories, participate in actions to change federal policy to be compassionate rather than inhumane, and contribute to or volunteer with humanitarian organizations that are making a real difference in people’s lives who currently have no where to go.