Day 3 Reflection from the Border

Over our three days, our multi-faith delegation had plenty of opportunity to pray with people one on one. Yesterday after spending several hours in Matamoros, we held a collective prayer vigil next to the bridge shortly before leaving. This trip has been an extraordinary experience, especially traveling with such thoughtful, engaged colleagues, government leaders, and immigration activists.

For our prayer vigil, Rev. Eileen Wiviott of the Unitarian Church of Evanston led a beautiful song that said, “Where you go Beloved, I will go. Your people are my people.” Because I knew the most Spanish, I explained in Spanish that we were there to hear the stories and witness what the impact of the Migrant Protection Protocals, only to discover there is no protection provided for migrants seeking asylum. Rev. Ben Lynch of Fair Oaks Presbyterian prayed for strength and peace to be among the people. Rev. Eric Biddy of St Christopher’s Episcopal church prayed for the children’s health and well-being. Rabbi Max Weiss of Oak Park Temple spoke of the current holiday of Sukkot and how it calls for the protection of all people with adequate shelter. Rabbi Ari Margolis of Congregation Or Shalom in Vernon Hills then sang a Jewish blessing from the Sukkot celebration. Rev. Scott Onque’ of St Luke’s Missionary Baptist Church in Chicago and Director of Policy at Faith in Place prayed for God’s blessing on the people here to know they are not forgotten. Rev. Marshall Hatch Jr. of New Mt Pilgrim Missionary Baptist Church and the Maafa Redemption Project prayed for God to lift the voices of those on the margins and declared that in God’s perspective a government without justice is no more than organized crime. Rev. Ira Acree of St John’s Bible Church led us in singing “Ain’t Gonna let Nobody Turn Us Around” and called for the end of the Migrant Protection Protocols.

As we finished the service, a woman fainted, apparently of heat exhaustion. She was unable to walk. She looked like she was in severe distress. Several people sent for medical help but it was 45 minutes before an ambulance arrived.

Just before we left the encampment of migrants, we unfolded banners that said End MPP meaning End the Migrant Protection Protocols that has fostered this refugee crisis. The other banner said Abolish CDP because the development of this force treats human beings in search of a better life as criminals.

We then began to sing Wade in the Water as we walked across the bridge back into the United States. On the very first street corner, the banners were unfurled. Two of the local immigration activists were in tears. They never imagined seeing a clear call to end the policies and procedures that dehumanizes so many people.

Then began the press conference. Chicago WBEZ reporter Maria Zamudio traveled with us. Her amazing story can be heard at https://www.npr.org/local/309/2019/10/17/771001018/chicago-area-activists-protest-conditions-at-the-border  She tells our story so eloquently.

For me, this trip was an extraordinary opportunity on several levels. First, to see for myself in a multi-faith circle of trusted colleagues the impact of what is going on at the border. Second, to bring beloved a broad range of colleagues in closer relationship with immigration justice leaders that have been so inspirational to me. Third, to witness the inspirational witness of Team Bronzeville that now feeds 1,000+ people. And lastly, to develop a circle of relationships that gives us hope that our collective voices matter in the face of horror occurring at the border.

More reflection to come as well as specific ways to be of support!
Posted by Alan Taylor at 8:21 PM No comments:

Day 2 Reflection from the border 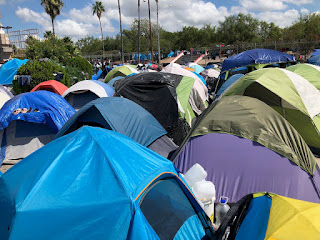 Yesterday I returned to Matamoros with our multi-faith clergy delegation from Chicago. When I encountered Mario again, he was with his son and daughter. I asked him about his tent and he offered to lead me there. To engage with his daughter, I said in Spanish, “Can you show me the way to your tent?” When she didn’t answer, her father said, “Donde esta nuestra casa?” It suddenly hit me: they referred to their small tent as their home.

Betty Alzamora and I followed him through a massive conglomeration of tents and clotheslines to where he and his children live. Their tent was squished between two other tents. A couple dozen people came out of the tents curious about the priestly looking figure that just entered their living space. Betty and I explained why we are here—we want to witness the reality of what’s happening just across the border and hear the stories of people who are living there. We are here to pray with them and let them know there are people of faith aware of their circumstances and will work to alleviate them. 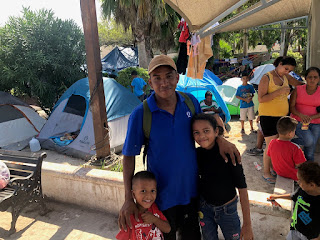 I knew Mario is from Honduras. What surprised me was that this spontaneously created neighborhood had people also from El Salvador, Nicaragua, and Guatemala. These people were literally taking care of each other, looking after one another’s children and providing one another safety. Betty and I spent two hours listening to their stories. All of them fled their homes in fear for their lives or the lives of their children. Some had lost family members to violence at home. Others knew their daughters were at significant risk of being kidnapped into the sex trafficking pipeline. Still others had come forward as a witness to violence and were told they would be killed if they didn’t leave their home. While they felt safe in this crowded community, they feared venturing out into Matamoros—it is known to be one of the most dangerous cities in Mexico. The U.S. State Department ranks it “Do not enter” for U.S. citizens, the same classification for Syria and Afghanistan.

Now all these people in seek of protection are finding themselves stuck between the Rio Grande river and one of the most dangerous places on earth. All they’ve got is a makeshift community without running water. The “Migrant Protection Protocols” of the Trump administration is literally putting people into danger. These people are obliged to fend for themselves in desperate conditions. All of them have a court date, at least three months of waiting that often results in either waiting for another court date or outright refusal.

The stories are utterly heartbreaking. These people are largely dependent on the generosity of humanitarian efforts. Last night our clergy delegation heard from the leaders of Team Bronzeville. Fifteen months ago they organized to provide two meals a day to the migrants stuck at the border. There were only 30 people there at that time. Six weeks ago there were 300. Now, there are over a 1,000 people. They do what they can. I will share more soon about the water purification system they wish to install and other ways they are seeking to provide for the burgeoning number of people in their backyard.

This is a refugee crisis in the making. Today I will cross into their camp a third time and I will catch two flights back to Chicago this afternoon.

There is a lot for me to process right now. I will share more in time.

Reflection from the Border

I am currently in Brownsville Texas with a multi-faith clergy delegation, two state lawmakers, and the leaders of PASO and Mano a Mano. Yesterday, we crossed the border where over a thousand migrants seeking asylum are camped out in tents. The tents are pushed right up against each other because there is so little space between the border and the city of Matamoros, which is known to be very dangerous. It was 93 degrees Farenheit yesterday afternoon.

What is most striking are the hundreds of children, some playing with such beautiful sparks in their eyes and others who lay listless in the arms. I have enough facility with Spanish that I introduced myself to several different families. I met many people from Honduras, Nicaragua, Guatemala. I met one family from Guerrero, Mexico. All of the families had the same story of fleeing violence in their community—all of them at a loss of where to find safety other than seeking asylum in the United States.

I spoke at length with Mario, a father with a 4 year old and a 1 year old. I was struck how he repeatedly kissed his four year old. And when he was talking to me, his son would kiss him with an affection that communicated to me that what they have is each other. His wife and oldest daughter are in Dallas, where his wife is working as a cleaning lady. He has not seen her for six months, but he does intermittently call her when he is able to use someone’s cell phone. I gave him my phone to call her—it was a Dallas number. He talked for 12 minutes and then gave me back the phone extraordinarily appreciative.

I prayed with several different people, all of whom came to tears. Today I will go across the border again and talk to more people and help Mario with filling out papers online he needs for asylum. However, the current policies and procedures of the “Migrant Protection Protocols” are living up to the name that everyone has for them “Remain in Mexico.” Unless the United States government changes the policies, I don’t have any hope that Mario and kids will be able to join his wife and older daughter. The most I can offer him is that there are people like me who know his story and will do what we can to change the laws.

Early this afternoon, our clergy delegation that includes two rabbis, two UU ministers, four Missionary Baptist ministers, a Presbyterian minister and an Episcopalian priest, we will hold a prayer service for the people who are migrants there and then in the late afternoon, on U.S. soil, we will hold a vigil and demonstration with the local immigration rights leaders to put pressure on U.S. Representative Fileman Vela (D) to intervene and stop returning seekers of asylum to such a crowded area on the outskirts of one of the dangerous cities and regions in the world.

Alan
Posted by Alan Taylor at 7:32 AM No comments: