9/11: From Catastrophe to Renewal

Fourteen years ago, I didn’t own a television. I learned of the horrific events of that day as I turned on NPR during my morning routine.

I was so horrified by what I was hearing I rushed outside and found others similarly traumatized. Neighbors I had never talked to previously now were sharing of our shared incomprehension: How could people hijack four planes and seek to maximize death and destruction, aiming at the heart of American commerce and government?

In the following days, I read an enormous amount about the people killed, the perpetrators, and ways we could respond as people of compassion, people of faith, and as a nation. This was my coping mechanism.

At that time I was serving the Unitarian Universalist congregation in Woodinville, Washington, located at the northeast corner of the Seattle metro area. I had never previously experienced such a profound sense of solidarity with my fellow Americans.

But I also struggled with the frequent jingoist calls for “God Bless America.”

I struggled with the rhetoric declaring us as God’s specifically ordained nation, especially as our nation’s leaders prepared for war with a nation that had no connection to the September 11 attacks.

“You are either with us or against us.”

The moral certitude of our leaders was quickly eroding that wondrous sense of solidarity that I experienced immediately after the attacks of September 11.

It was true that Saddam Hussein had a long list of bad deeds. But going to war with a nation that had not attacked ours seemed ludicrous. It was a response that could potentially destabilize an entire region.

I began to find solidarity among those who were similarly shocked and horrified by the prospect of invading Iraq.

For the first time in the history of the suburb of Woodinville, protests gathered--and not just a single protest, but twice weekly protests.

Similar protests in similar communities started to occur all across the nation. The staggering numbers of Americans willing to set aside their daily routine to declare opposition to an immoral war was inspiring. How could our nation’s leaders ignore the most widespread protests in American history?

The local paper published my letter opposing an invasion of Iraq, to which I received hate mail accusing me of being anti-American. The bully tactics in my own community were astonishing. When the efforts of so many thoughtful, concerned citizens were ignored at the national level and often vilified at the local level, I began to lose faith in what it means to be an American.

Instead of raising an American flag in worship, I raised a flag with a picture of the earth on it--and shared with my congregation why.

I believe people of faith should have as our ultimate concern all people, all nations, the world as a whole.

However disappointed we may be in how our country responded fourteen years ago, we must get truly real with what is going on today, grieve our tremendous pain and loss, and find our way to compassionate attention.

I am horrified by the barbarity unleashed over the past fourteen years. If the leaders of Al Queda sought to catalyze a growing movement of violence and terror, then they were wildly successful.

Prior to September 11th, suicide bombers existed but were rare in their attacks. Now we hear of attacks almost every day--as well as young people lured from their homes.

Prior to September 11, there was hardly any destruction of cultural sites, and now vast troves and significant monuments of human culture are gone. Grisly executions of innocents were previously unimaginable.

It is tempting to long for the pre-September 11 days, but we need to make sense of these memories and the changing world we live in.

What does it mean to love with courage in the post-September 11 era?

As I pray on this question, I return to these words: hospitality, honesty, and renewal.

Hospitality emerges when we welcome others and their perspectives into our hearts, our homes, our communities.

Honesty is key. We cannot grow or respond with compassionate attention unless we are honest about our struggles, honest about what is happening in the world, and honest about how we struggle and fail to live up to our ideals.

Renewal is also a crucial step. Coming to terms with chaos and brutality in the world is overwhelming. We need to gather with others for the sake of renewing our spirits and discerning how to move forward

My congregation sings this hymn; it is a hymn of hospitality, honesty and renewal:

This is my song, O God of all the nations,
A song of Peace for lands afar and mine.
This is my home, the country where my heart is;
Here are my hopes, my dreams, my sacred shrine.
But other hearts in other lands are beating,
With hopes and dreams as true and high as mine.

My country’s skies are bluer than the ocean,
And sunlight beams on cloverleaf and pine.
But other lands have sunlight too and clover,
And skies are everywhere as blue as mine.
Oh hear my song, oh God of all the nations,
A song of Peace for their land and for mine.

When does it make sense to do something dangerous? 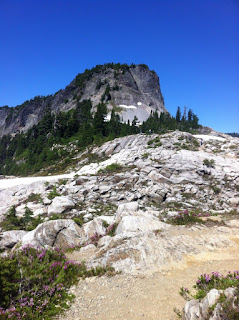 Recently, I was hiking with my family in the Mt. Baker-Snoqualmie National Forest, well north of Seattle on the west side of the Cascade Mountains. I was excited to ascend Table Mountain with them.

The trail begins as a gravel path that winds up and through interesting rock formations on its way to a broad flat area that gives the mountain its name. Locals take visitors on this hike because it offers both breathtaking beauty and the exhilaration of hiking through significant altitude gain. However, this path can be frightening for those who have only viewed mountains through the windshield. The guidebook specifically warns that there are no rails along the rocky mountainside, but that the trails are wide enough for two people to walk side by side.

We had hiked over half of the trail, when two women descending saw us and said, “Have you been up here before? We don’t know if we’d take children up here.” Heeding this warning, I walked ahead alone to the top. Because I felt comfortable I returned to my family and took my four-year-old in hand. Angie took our seven-year-old, and we began the most strenuous part of the trail.  The kids were safely tucked on the mountainside as we walked along the edge.  Once we reached the “table" top, the kids played in the snowdrifts and meadow, while we enjoyed the magnificent views.

After trekking back down, we reached the trailhead and parking lot, where we spotted a sign we had not seen before: “This trail is not recommended for young children.” If we had seen this warning earlier, we wouldn’t have gone up.

Was I foolish for taking my kids up this perilous mountain?

When my family forged ahead on the hike up those steep trails, never would I have thought that I would stumble upon a significant metaphor for life.

For my children, I wonder if this journey engendered an understanding of  “The narrow ridge.” an experience Hasidic Rabbi Martin Buber describes as living our ordinary lives with anticipation. It is an inner orientation to navigate our lives by accepting our vulnerability as we commit to living as vibrant, engaged human beings. When living on “the narrow ridge,” we don’t always take the safe or convenient route; we are instead open to where life and love are calling us.

Howard Thurman notes, in The Inward Journey, that for some, there can be no security in life apart from being surrounded by clear landmarks and well-worn paths. “The one great fear,” he says, “is the fear of change; the one great dread is the dread of strangeness.”

There is strength in cultivating routines and rituals. But there is risk in developing patterns that prevent us from honest encounter with what is going on in, among, or beyond us. When we seek to live behind a sure and continuous windbreak, our days come and go without a sense of endurance. We risk dying while we are alive.

I agree with Martin Buber that life is at its best when lived “on the narrow ridge.” We live with anticipation. While we recognize the need for routines and addressing the demands of everyday life, the meaning of our lives is not limited to the daily grind. There is always the possibility of unexpected joy, of an encounter that broadens our horizons, of an opportunity to act in relationship with one another.

Posted by Alan Taylor at 8:40 PM No comments: