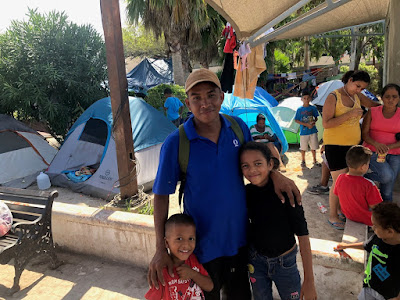 It’s been three weeks since I returned from the border. On my last day there, I bought a phone for Mario, the Honduran man his 4 and 9 year old children with him and whose wife and eldest daughter are in Dallas. They left before him after Mario’s brother-in-law was killed and they feared their daughter would be kidnapped into trafficking. But then the Migrant Protection Protocols were instituted and that has kept Mario and his two younger children separated from his wife and eldest daughter.

I hired a lawyer for him and he went to the makeshift court in a large tent the following Monday. The judge was shown on a video screen. An interpreter was on the telephone. After the hearing he and his two children were given a second court date in late February. He’s been stuck at the border for nearly four months and has another four to wait out. Hopefully the lawyer I have retained can help him reunite with his family, as a lawyer makes it 14 times more likely to be granted asylum. However, the likelihood is still very small. 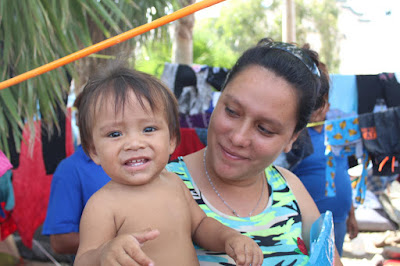 I am in touch with Mario and his neighbor Karla who has a 1 year old. Karla and her family had the same court date and so I’ve retained the lawyer for them too. Their greatest concern is the cold—and Karla’s baby’s health. Dylan has been sick with a cold the last several days. It is relatively cold at night and she doesn’t know how to find care for her son.

Their greatest expense is to keep their phones charged. The local merchants charge 10 pesos—50 cents—to charge a phone for an hour. Utter extortion from people who have virtually nothing.

They and the 2,000 other migrants in Matamoros rely on the kindness of humanitarian workers who bring food, water, clothing, blankets, and shoes. Team Bronzeville is raising funds to not only keep feeding the migrants but to create a water purification plant to provide clean water to everyone there.

What to do? Some of the clergy who went with me are organizing a trip to support the humanitarian efforts to help feed the migrants. We certainly could send a UTUUC delegation to do this in collaboration with them.

But the desperate conditions for thousands and thousands of people up and down the border won’t get better until the Migrant Protection Protocols are ended. This will take pressure from many sources.

Illinois State Representatives Lisa Hernandez and Rita Mayfield were part of our delegation. They have submitted a resolution to the House to call for the ending of the Migrant Protection Protocols and call upon the Illinois delegation to the U.S. House and Senate to do the same. 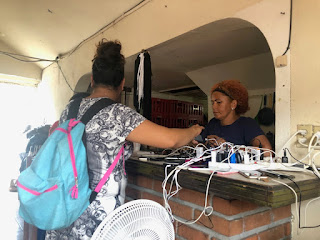 There will be opportunities to address this here in Chicago. And I'm sure there will be another opportunity to travel to the border again to put pressure on the U.S. Representatives, but I want to do this only in collaboration with others where we can amplify each other’s power.

Maria Zamudio, a journalist for NPR, also joined us on this delegation. Click here for her third story.
Posted by Alan Taylor at 7:52 PM