Discovering Love As a Source of Power


As I’ve sought to understand how ‘radical love’ can heal both individuals and nations, my guide has been Martin Luther King. King’s spiritual teacher was Jesus Christ, whose simple yet profound message of “Love your neighbor as yourself” is the premise underlying all of Christianity. How does the teachings of Jesus apply to institutions, systems, and nation states? 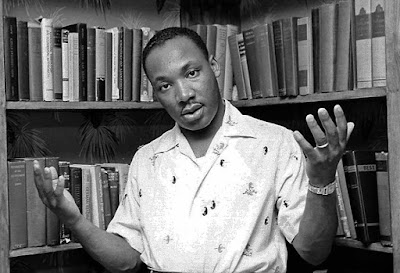 King began wrestling with this question in his teens. He suffered a crisis of faith as he contemplated the gulf between superfluous wealth and abject poverty.  He sought to understand how Jesus's teachings address the wider problems of the world, but as he read some of the greatest thinkers on this issue, he wondered if the source of his faith provided the foundation to conquer this soul-crushing divide.

As he studied Karl Marx, he came to understand, in King’s words, “Capitalism is always in danger of inspiring people to be more concerned about making a living than making a life. We are prone to judge success by the index of our salaries or the size of our automobiles, rather than by the quality of our service or relationship to humanity.” But King felt the implementation of Marx's ideas would lead to a totalitarian state.

King also studied Friedrich Nietzsche and his attack on the whole of Hebraic-Christian morality with its virtues of piety and humility, its otherworldliness, and its attitude toward suffering as the glorification of weakness and passivity. Nietzsche challenged King with how his faith could address the greatest social issues of our times.

King discovered a compelling answer when he attended a lecture given by Mordecai Johnson, the president of Howard University. Johnson had just returned from India where he was inspired by the life and teachings of Mahatma Gandhi.  After the lecture, King threw himself into reading Gandhi and became deeply fascinated by his campaign of nonviolent resistance, particularly the Salt March to the Sea and his numerous fasts.

King was particularly inspired by the concept of Satyagraha where, in Sanskrit, satya means “truth” or “love” and agraha means “force.” This concept of Satyagraha -- truth-force or love-force – completely changed King’s perspective. Prior to reading Gandhi, King had just about concluded that the ethics of Jesus were only effective in individual relationships. “The ‘turn the other cheek’ philosophy and the ‘love your enemies’ philosophy were only valid, I felt, when individuals were in conflict with other individuals,” he writes. “When racial groups and nations were in conflict, a more realistic approach seemed necessary.” 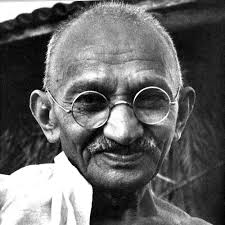 “But after reading Gandhi,” King continues,  “I saw how utterly mistaken I was. Gandhi was probably the first person in history to lift the love ethic of Jesus above mere interaction between individuals to a powerful and effective social force on a large scale.”

Satyagraha  -- truthful, forceful, radical love --  for Gandhi, was a potent instrument for social and collective transformation. King embraced this philosophy and used it in his landmark civil rights work.

I will in time explore further the evolution of King’s commitment to nonviolent resistance and more about Gandhi, but here I want to focus on the basic invitation that exists for each and every one of us. No matter how destructive the breach between wealth and poverty becomes, no matter how horrifically people treat one another, no matter how challenging life becomes for us, there always exists an invitation to individual and collective transformation, a call to radical love.

For each of us, this call looks different and it changes over time. For some, this call is about caring for an ailing relative or friend; for others, it is becoming a mentor to economically challenged children; for others, it is providing legal aid to the incarcerated or indigent, or creating paths to resettle refugee families. The list goes on and on. There are many opportunities of service that are worthy of us and our commitments, and radical love in our individual lives leads us to give of ourselves for the sake of others in ever more meaningful ways.

But for some of us, the call is to address the broader systems of power that keep individuals chained to their limited beliefs and passive behavior. The call is to take action against the source of the wrongs that exist in our society.

I turn to King for learning how to rise to the challenge of addressing the injustice of an entire system, in which most people who benefit from this system fail to see how others are not benefitting – others who are, in fact, suffering.

I end with a reading from King’s essay “Stride Toward Freedom” that I take from The Radical King, edited by Cornel West:

Nonviolent resistance avoids not only external physical violence but also internal violence of spirit. The nonviolent resister not only refuses to shoot his opponent but he also refuses to hate him. At the center of nonviolence stands the principle of love. The nonviolent resister would content that in the struggle for human dignity, the oppressed people of he world must not succumb to the temptation of becoming bitter or indulging in hate campaigns. To retaliate in kind would do nothing but intensify the existence of hate in the universe. Along the way of life, someone must have sense enough and morality enough to cut off the chain of hate. This can only be done by projecting the ethic of love to the center of our lives.
Posted by Alan Taylor at 5:25 AM No comments:

Black Lives Matter is the motto for a movement created by American citizens in response to recent, highly publicized incidents of racial violence and injustice throughout our country. The motto symbolizes the concern for racial justice and equality. 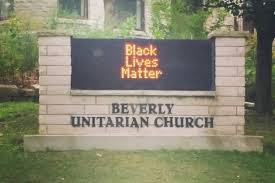 When Beverly Unitarian displayed Black Lives Matter on their sign, it generated enormous controversy, including venomous responses to a photo of the sign posted on Facebook that went viral. Comments were cruel and obscene, even including threats of violence. The Beverly Church board was so shocked by these bully tactics; they elected to change their sign to “Life Matters, Risk Loving Everyone.”

This decision also went viral, especially among activists on the left who felt the church demonstrated weakness by capitulating. Calling the new decision “racist” and “deeply hurtful,” those who objected charged the church with failing to understand that “Controversy is necessary in the journey of justice-making.”

Even more challenging, Beverly is home to a huge number of Chicago police officers and firefighters, many of whom are part of the congregation. The vitriolic comments that poured onto the church accused the congregation of being anti-police and stoking violence against police. This was so upsetting that the board felt the need to clarify their position.

Racial tensions are entrenched here, muddied and inflamed by political leaders and media pundits to whom prejudice and hate speak have become normalized chatter.  One example is Fox News’ focus on the Republican presidential candidates that are framing the phrase Black Lives Matter as anti-police and calling those who support the cause anti-American.  (In truth, the movement is about being anti-abuse.)

I was approached by a fellow Unitarian Universalist to sign on to an open letter designed to publicly shame our fellow Beverly congregation into restoring Black Lives Matter to their sign. I refused to sign this letter and I sent my refusal to local colleagues and others who received the request.

This is a learning moment for Unitarian Universalists, other progressive congregations, and all of us who want to participate in the work of correcting the sins of racism. There’s no question that generating controversy is good and natural in the work of culture change and justice making. When a congregation stands together for a value held sacred, it deepens the community’s capacity to embody a specific value and integrate it into the wider society.  But how do we respond to controversy? More importantly, how do we use it to generate understanding, compassion…. and change?

This is delicate and challenging proposition.  The issue at hand isn't simply the sign, it is so much more--the institutional racism that pervades our culture and how human beings are profoundly diminished and destroyed by this racism. That's what we need to address. And we need to look at how we are engaging our justice work--are we clinging to our opinions, rabidly promoting them and demonizing those who choose a different way? We Unitarian Universalists tend to be opinionated people with a very high opinion of our opinions!  We can forget that strength comes in deepening in relationship with others--and this includes our capacity to listen to others, to hear multiple perspectives, and--here's what's most challenging--to love even those with whom we strongly disagree.


Rev. Jennifer Nordstrom, my colleague at Third Unitarian, puts it eloquently: “The work of racial justice is long-haul, deep-commitment work. Though we are all hurt by racism, people of color’s lives are threatened by it while white supremacy ensures that white people have more power in society to deal with their
feelings than people of color do.”

I am inspired that Beverly UU Church is on board to do this work. Their minister, Rev. Karen Mooney, tells me they will be using this moment to engage with their ecumenical neighbors and educate each other. “We are working to create spaces where we can hear each others stories, work together, laugh, and be vulnerable,” she says. “The work that I see before us it to make visible the systems of power and privilege that we all live within.”

While I encourage all congregations to show solidarity with the movement for racial justice and display Black Lives Matter in front of our congregations, I joyfully affirm the sign in front of Beverly Unitarian Universalist that now displays “United against hate and fear. Stand with us against racism.”
Posted by Alan Taylor at 4:24 AM No comments: