Division Is a Choice. So is Overcoming it.

A couple readings that bring me solace at this time of deep division. The first is from my colleague Rev. Lynn Unger. The second is from Robert F Kennedy.
Mathematics
There is no algebra for death.
No life lost cancels out another.
The idea that there is some other
side to the equation is a lie
perpetrated by centuries of war and revenge.
There is no other side. You cannot subtract
and equalize the equation.
There is an addition of loss,
grief upon grief upon grief.
There is a multiplication of loss,
ripples of sorrow expanding
through families, friends, communities, nations.
Division is a choice.
Division is a choice.
Lynn Ungar 7-8-16
I have some very sad news for all of you, and I think sad news for all of our fellow citizens, and people who love peace all over the world, and that is that Martin Luther King was shot and was killed tonight in Memphis, Tennessee.
Martin Luther King dedicated his life to love and to justice between fellow human beings. He died in the cause of that effort. In this difficult day, in this difficult time for the United States, it's perhaps well to ask what kind of a nation we are and what direction we want to move in.
For those of you who are black - considering the evidence evidently is that there were white people who were responsible - you can be filled with bitterness, and with hatred, and a desire for revenge.
We can move in that direction as a country, in greater polarization - black people amongst blacks, and white amongst whites, filled with hatred toward one another. Or we can make an effort, as Martin Luther King did, to understand and to comprehend, and replace that violence, that stain of bloodshed that has spread across our land, with an effort to understand, compassion and love.
For those of you who are black and are tempted to be filled with hatred and mistrust of the injustice of such an act, against all white people, I would only say that I can also feel in my own heart the same kind of feeling. I had a member of my family killed, but he was killed by a white man.
But we have to make an effort in the United States, we have to make an effort to understand, to get beyond these rather difficult times.
My favorite poet was Aeschylus. He once wrote: "Even in our sleep, pain which cannot forget falls drop by drop upon the heart, until, in our own despair, against our will, comes wisdom through the awful grace of God."
What we need in the United States is not division; what we need in the United States is not hatred; what we need in the United States is not violence and lawlessness, but is love and wisdom, and compassion toward one another, and a feeling of justice toward those who still suffer within our country, whether they be white or whether they be black.
So I ask you tonight to return home, to say a prayer for the family of Martin Luther King, yeah that's true, but more importantly to say a prayer for our own country, which all of us love - a prayer for understanding and that compassion of which I spoke. We can do well in this country. We will have difficult times. We've had difficult times in the past. And we will have difficult times in the future. It is not the end of violence; it is not the end of lawlessness; and it's not the end of disorder.
But the vast majority of white people and the vast majority of black people in this country want to live together, want to improve the quality of our life, and want justice for all human beings that abide in our land.
Let us dedicate ourselves to what the Greeks wrote so many years ago: to tame the savageness of man and make gentle the life of this world.
Let us dedicate ourselves to that, and say a prayer for our country and for our people.
-RFK April 4, 1968
Posted by Alan Taylor at 8:16 PM No comments:

Mourning All Victims and Praying for Healing

The past week, I was with my family in a campsite, away from all electronic media. When I returned to civilization, I learned of two more black men needlessly killed by police officers and, at a Black Live Matter rally in Dallas, five police officers were shot and killed by a black sniper.

I am heartbroken and saddened by both the continued brutality and escalation in violence.

I mourn the loss of all these lives and I grieve for their families. The heinous intentionality of the police killings hits at a visceral level just as the killing of unarmed individuals. If you feel helpless, I encourage you to gather with others who share similar commitments.  If you are in Chicago, I encourage you to participate tomorrow in the interfaith and interracial Prayer for Peace. It is hosted by one of the great churches on the westside of Chicago that is a leader in the African American community. It is the same church that hosted the Call to Unity thirteen months ago following the Charleston massacre.

Now is a time to engage with others, opening to relationship cross religions and cross races. This is what is needed if our nation is to heal.

Here is the information: 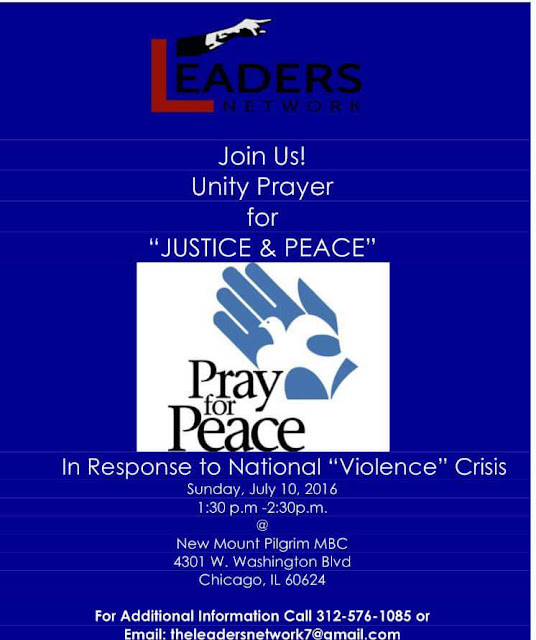 Posted by Alan Taylor at 7:30 PM No comments: