To honor the legacy of Rev. Martin Luther King, Jr., 1,500 people of faith gathered on January 18 at the First Baptist Congregational Church on the west side of Chicago. More than 20 elected legislators were there, as were the three candidates running for Cook County State’s Attorney. We called upon them for fair police reform, expanded restorative justice efforts, and working toward a fair income tax. 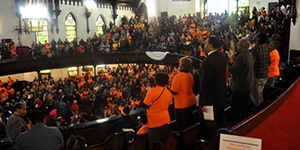 All these people showed up even when it was 5 degrees outside, including 250 Unitarian Universalists from eight congregations. I was delighted that more than 80 people from the congregation I serve at Unity Temple showed up. Because we gathered with other people of faith and brought our voices together, we demonstrated a powerful coalition. Because we all showed up together, people in decision-making roles know what is important to us as a powerful collective. And, they will be accountable. For example, not only did all the elected officials agree to our policy platform, all three candidates for State’s Attorney agreed to meet with the Community Renewal Society every three months.

I’m grateful for other religious leaders and communities who, like us, use their ability to connect and organize in order to work together for meaningful change. One of those is Rev. Marshall Hatch.

I’ve recently become close to Rev. Hatch, who has served for more than 20 years at New Mount Pilgrim Missionary Baptist Church in North Lawndale. On December 26, Rev. Hatch visited a home where violence had taken two lives just that morning. There, he discovered a member of his congregation, sobbing, “Pastor, the police, they killed my mother.”

Bettie Jones was killed in the incident involving the shooting of Antonio Legrier’s son.  Mr. Legrier had called the police to explain that his son was suffering from mental health problems.  Apparently, he had appeared dangerous to the police because he was wielding a baseball bat. However, once the facts of the case became clear, the physical evidence appears to question the story reported by the police.

Shortly after that, Rev. Hatch was on his way to a gathering I attended. He was stopped by a white man where a police car was blocking the road near the home where the shooting had occurred.

The man motioned to Rev. Hatch to lower his winder and said, “I recognize you from WTTW and I knew Bettie Jones.” Tears began forming in his eyes as he added, “I also know the officer who shot her and Antonio -- Officer Rialmo. He’s just a kid who made a terrible, terrible mistake!”

“We need more voices like yours,” the man said.

If you live in the Chicago area, I invite you to join me for an evening with Rev. Marshall Hatch, Pastor Ira Acree, and Pastor Cy Fields. They will share about their organization, The Leader’s Network that serves the needs of the westside of Chicago. It is a community leaders network led by these pastors.

We will together explore what it means for all of us who live in Chicagoland’s western corridor to stand together, in relationship, as we work to oppose violence, corruption and injustice.

The event is at 7:30 p.m. on January 25. We will gather at Pilgrim United Church of Christ, 460 Lake St. (The Oak Park Farmer’s Market is held in their parking lot.)

This gathering is hosted by the Community of Congregations.