A Christmas Message with two readings

No one wanted the nativity set. In the old pool hall that our congregation bought last summer for our new community center and offices, there were hundreds of statues and doodads and holiday decorations, along with 32 pool tables. After a congregational sale, a public sale, and a second public sale, where over $30,000 of merchandise was sold at low, low prices, the rather large box that included eight figures of a nativity set still remained.

So I took it home where it stayed in our garage until Thanksgiving weekend, when we set up our tree and decorated the house. My wife put the nativity figures on the floor in front of the tree and said this was what they did in Mexico. Not only did it seem a little odd set out on the hard wood floor, but there was no angel in the set. I commented that this must be a Unitarian nativity. 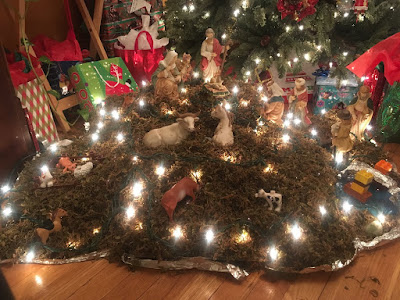 A week later, I came home and discovered she and a Mexican friend had made a landscape that must be at least twelve square feet, different levels and moss covering it with the figures set out, and an angel, the very angel that one of the volunteers at the public sale had bought and given to my five year old daughter. Not only was the nativity scene beautiful, but it felt complete to me, for it is the angel that announces the good news throughout the land that love has been incarnated, God’s child has been born.

My eight year old son explained to me that he helped put out a bunch of animal figurines from his toys to add to the scene and that he helped figure out where they all should go. Then Marco told me that someone really important was missing. I asked who? And he said, “Santa. There’s no Santa here in our new really cool Christmas decoration.” As he looked at me with a concerned look. I took a big breath and said, “Oh Marco, the nativity celebrates the birth of Jesus as the incarnation of God’s love in the world. And he was born over two thousand years ago. Santa is also an incarnation of love, and even though he’s old, he’s not that old.” We talked about the pageant story that he helps enact each year and explained that the nativity story is the most celebrated story of love coming into the world, particularly when the darkness is truly vast.

The Christmas story is counter-cultural. It is about the incarnation of love, the kind of love that not only shares bread with the hungry, shelters the homeless, and clothes the indigent but also loosens the bonds of injustice, liberates the oppressed, and unshackles those in bondage. The King of Kings comes not in regal fashion but in the lowliest of places, for there was no room in the inn. That’s the kind of place where love is born, and that’s the kind of world that we’re in where in several places there is no room in the inn for a young woman about to give birth.

My friends, this year darkness seems to stretch especially far and wide. There are places in the world torn apart by war, where ordinary people live in conditions so horrific that have been created by other human beings consumed with hatred and a lust of power. There are staggering numbers of refugees in our world, more than any time since World War II, wondering if there will be a safe place for them to sleep and raise their families. Is it not true that all these centuries after the nativity story, we human beings are lost and wandering still, stumbling at every step over our own greed or need, our ignorance or fear. Even in this country, there is great uncertainty and much of what we so dearly cherish seems threatened.

After a year of far too much bloodshed both near and far, the birth of the vulnerable among us is a reminder that peace is precarious. One of my colleagues from the westside expressed appreciation for The Lutheran pastor, Dietrich Bonhoeffer who recognized that peace must be dared. The way of peace is not hewing to the safe, secure path but it is venturing forth without any guarantees, responding to what we know deep within is true despite the fear, that Christmas Peace comes when we turn and face the darkness, that Christmas Peace comes when we accept our vulnerability and look upon others through our own vulnerability, Christmas Peace comes when we are among those more humble folk that recognize what really matters rather than those who pursue power, wealth, and recognition.

It is in the dark that love is reborn. For we gather this evening to celebrate a story that has kindled hope in the hearts of ordinary people century after century, enduring empire after empire, for the simple truth that love is incarnated in the world through the compassion and kindness and sensitivity of people like us, people who are vulnerable.

I didn’t tell Marco this, but I will sometime as he matures: the incarnation of God’s love needs help. The world doesn’t change just because people pray for peace and goodwill, the world changes as we are changed by those prayers to act with kindness and understanding for the sake of peace and goodwill. The incarnation of love that emerges in human hearts is spread by other human beings who are touched by kindness and joy and hope.

Even Santa needs help. I had the opportunity to help Santa in a very tangible way. Santa wasn’t able to show up himself to the youth center of RefugeeOne and I was asked if I would fill in for him. The youth center meets at Unity Lutheran Church up on the far northside of Chicago. It was a bitterly cold late afternoon but the moment I stepped inside that building and heard a child’s laughter, my heart began to warm. 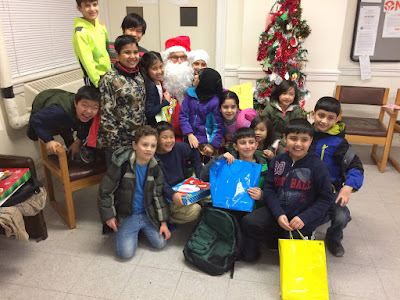 Santa provided me a suit to wear and even hair, a beard, and a hat. I entered the room with a cheery ho, ho, ho. I asked the kids who thought it was cold and assured them it’s even colder from where Santa comes, but despite the cold, hope and love can come forward in any life. I invited each child to sit next to me. One by one, I asked them what made them smile or laugh in the past year and what then what they hoped for in the next year. And then I gave them a gift and wished them a Merry Christmas.

The last of the young people to talk with Santa was a 16 year old from Malaysia. He approached me tentatively with an awkward smile. After he received his gift, the staff asked for everyone to gather for a photograph and then they asked me to stand with the 16 year old and his two younger siblings. Of course many other kids wanted to be in the photo. The staff told me that this young teenager's mother had a stroke that rendered her unable to care for her three children. The needs of his young siblings now fall on his shoulders. These staff members said it was the greatest joy to see this boy and his siblings smiling so big.

No matter how cold or how dark the world may become, what matters is that kindness and compassion are always possible. Though it is hidden to so many, the light of the world shines through the practice of love. We in American culture forget this at our peril. Peace comes when enough of us embody love. It is a paradox, the light of the world resides in the simple, the vulnerable, the humane, the kind, the compassionate. The light of the world spreads with acts of love, with human beings like us taking the way of peace. Whether in small acts or large, love is born each and every day and night. And tonight we celebrate the stories of how this love, the source of all love, incarnates into the world, stories upon stories that have been embellished.

Now you might say, well, all this talk is just fantasy. And I’d respond, “Have I not seen tears in your eyes?” Have you not been moved by the innocence of a child?” “Is it not true that life is saved by the singing of angels?“ “When have scales fallen away from your heart?”  Now, this Christmas Eve, is a time to make room in the inn of our hearts that love beckons. The birth of love is all about us. The miracle of life is calling us this night. May we prepare room in our hearts for this miracle.

Reading: “Christmas Eve” from Kathleen McTigue
All these centuries after the story of the star, the wise men, the baby born in the stable and the angels singing him in with their mysterious alleluias, we are lost and wandering still. We stumble at every step over our own greed or need, our ignorance or fear. Bethlehem is not a gentle city tonight. Its people are wise in the ways of the clenched fist, the broken truce. Marked like them with the scars of ignorance and sorrow we come to Christmas baffled as any shepherd by the music that sounds so high above us, the syntax foreign to our skeptical hearts. Yet we try to speak the language of hope, lifting ourselves toward the future with a dream of what yet may be. We remember that the heart of Christmas is hope: hope that a child, born homeless and in danger, may grow up to be wise and kind; that the stars, serene in their darkness have something to teach; that there are mysteries around us, among us, singing ethereal harmonies. New hope in ourselves rises then, too: that we will learn, one day, and in the nick of time, how to walk our paths with truth and justice, how to bring peace to life on this earth, how to sing for ourselves the angels’ songs of praise, wonder and joy.

Reading: Christmas Always Begins at Midnight by A Powell Davies
The darkness is vast truly, but across it there is a path of light - a path of moving light.
It tells a story, a thousand stories gathered up now into the Christmas story. Of an empire that was disdainful and arrogant. Of the privileged and mighty who had sold their souls for the tinsel of a moment's pomp. Of priests and temples where God was a commodity and truth a joke grown stale. They did not see that the very ground beneath their feet was slipping; so much of it was moving, and so fast. It was like the turning of the earth unnoticed. They saw only what they looked for; things they could measure in the scales of power, and with the reckoning of gain and loss.
But there was something that humbler people could have told them; both of the old that was dying, and of the new that was newly born. For something had sung it at midnight. Something had shone in the darkest hour. A dream had been told and the hearts of women and men were kindling. Gentleness and brotherhood were waiting for the morning, and already in the nighttime were up and on their way.
And so the empire vanished as the empires of today will also disappear. The thrones of the mighty crumbled and their palaces went up in smoke. The temples fell in ruins and the weeds grew up, covering the sepulchres of apostate priests. While the song swelled into a heavenly chorus, and again and again the darkness shone; and the dream of Jesus won the hearts of women and men.