Fifteen years ago today, I met the woman who would become my life partner in a most unexpected place. I had just arrived in Mexico City the previous day to travel with a dear friend and colleague, Howard. On December 31st, 2000, we visited Teotihuacan, the pyramids just north of Mexico City.

After touring the pyramid of Quetzalcoatl and the Pyramid of the Sun, we decided to ascend the Pyramid of the Moon. A little more than half-way up, as we reached a large flat area, two women asked us to take a photo of them together. As we handed back their cameras, one of them said, “Let’s make a funny picture.” Howard said, “Okay, why don’t you make as if you’re throwing Alan off the temple.” 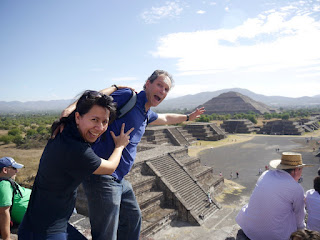 After taking a couple funny pictures, we laughed and talked briefly. We learned Angelica from Mexico City was giving a tour to her best friend Bea from Switzerland.

We then left. Later, we ran into the two women again in another part of the ruins. When we asked about finding a bus, they suggested they drive us back to Mexico City.

As we walked, Angelica asked me about my work. I didn’t want to say “minister” because that’s so often a conversation-stopper. So I said rather quietly, “Ummmm, I lead a church.” She exclaimed, “Oh, you’re a priest!” I tried to explain the difference, but clearly they felt safe with us, two gringoes who are pastors in churches!

“From here, we’re going to visit the Basilica,” Angelica said, “Because you are like priests, why don’t you join us?”

We loved seeing the bustle of people and activity, the relic of Lady Guadalupe, hearing the stories about the vision , and learning about the customs. When we went up to the church at the top of the hill where the relic had originally been housed, we were told the church was now closed. Angelica replied that she had two American priests with her. The attendants replied, “Oh, please, come in!”

This day of laughter and exploration wasn't quite over. Angelica acknowledged that a great way of learning about culture is to see how people live--and that she has had the opportunity to be in the homes of others. We were so comfortable with one another, she invited us to visit her home

Her parents didn’t blink that she brought two gringoes into their home. They served us "Ponche," a  traditional Mexican holiday beverage made by boiling native fruits. The house was decorated for the holidays. The pots were full of their traditional holiday foods to celebrate New Year’s Eve.

I got Angelica’s email address just before we descended to the metro station. Nine days later, after Howard and I traveled to Oaxaca and Xalapa to visit a friend from seminary, I invited Angie to come with her friend to join us for dinner. Because her friend was no longer visiting, she turned tp her sister, Beatriz, and said, “These guys are inviting us to Cafe Tacuba. They are like priests but they’re fun!”

This day was a fabulous story in and of itself.

Two years later we were married on a beach in a small town north of Acapulco. Howard officiated at the service. Bea was a maid of honor. In addition to our families, several friends and colleagues joined us from all over the world. 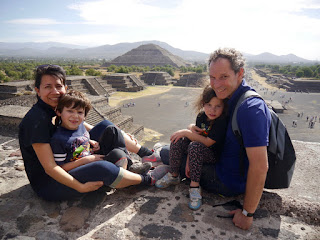 Today Angelica and I have two children, Marco and Erica. Each year we give thanks for the serendipity, grace, and laughter that brought us together.

Two days ago, we returned to the very spot we met, this time with our children. When I said, "This is the exact place where your mom and I met fifteen years ago," a man responded, "Wow! You've made my day, my vacation, my year." Others who heard this exclamation gathered around and asked us to tell our story.

You never know what might happen if you  open to simple, genuine connection when talking to someone unknown to you. Kindness and sharing joy transforms all culture.

We are still laughing together with a prayer that 2016 will bring love and peace and joy from unexpected encounters, gestures of kindness, and a willingness to explore and be touched by who we encounter wherever we are.