A Time for the Art of Remembering

What have you been forgetting these days? What small gestures or tasks or people have been overlooked? If you forget to pay your bills, there will be reminders, and painful penalties for late credit card payments. But what if you forget to call a friend or a relative? or share a goodnight kiss with your beloved? Its hard to forget to put on shoes, but so easy to forget to send a card to the grieving neighbor or friend. Forgetting is a common experience.

As I child, I went to a Unitarian Universalist congregation. There was no minister and no director of religious education. But every Sunday we sang hymns. And back then, we sang out of homemade song sheets. There were no notes, only words, but fortunately the melodies were usually pretty easy. The fellow who played the piano usually hit the right notes, but when he didn’t no one seemed to mind.

There was one song that seemed to be sung more than any other: This is My Song, sung to the tune of Finlandia:

This is my song, O God of all the nations,
a song of peace for lands afar and mine.
This is my home, the country where my heart is,
here are my hopes, my dreams my holy shrine,
but other hearts in other lands are beating
with hopes and dreams as true and high as mine.

My country’s skies are bluer than the ocean
and sunlight beams on cloverleaf and pine,
but other lands have sunlight too, and clover,
and skies are everywhere as blue as mine.
O hear my song, though God of all the nations,
a song of peace for their land and fir mine.

This song captured the soul of that small congregation, a core kernel of faith. That song conveyed a profound degree of poignancy that we were articulating something truly sacred. I felt religious every time I sang it. You know what? I still do.

Now this song doesn’t say the word love, but it is about love, agape love, the kind of love that Jesus talked about in his most difficult teaching, his teaching to love thy enemy. It is one of the most important teachings of Jesus to remember, and it is weaved into the origins of the holiday we celebrate this weekend. 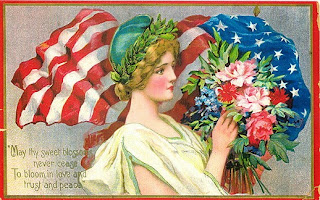 The history of Memorial Day goes back to communities in the south following the Civil War and their custom of decorating the graves of those who died in combat. In Columbus, Mississippi, the town’s cemetery contained the graves of soldiers from both the South and North. The women of the town decided to decorate all the graves, not just those from their side. It was a gesture of reconciliation to make no distinction between the political loyalties of the dead. Other towns followed suit. Soon the practice spread throughout the country and Memorial Day was made a national holiday.

Those southern women who chose to honor all of the Civil War dead did so simply because these soldiers' lives were cut short by a willingness to put their lives on the line for something greater than themselves. The act of reconciliation of these women was blind to who was a winner or a loser, right or wrong, but instead they demonstrated an essential realization that if peace is to prevail, there must come a time when we all must move on together. We all must begin again in love.

Theologian Mary Daley, when she writes the word "remember," puts a hyphen between the "re" and the "member" to express the idea of knitting back together what had been torn apart, relearning a way of being in our body-minds, integrating knowledge that we had forgotten.

Our culture suffers from amnesia regarding the costs of war. Unitarian Universalist theologian Rebecca Ann Parker in Proverbs of Ashes: Violence, Redemptive Suffering and the Search for what Saves Us (co-written with Rita Nakashima Brock) writes about a pastoral visit she made to the home of one of her parishioners, Maxine. Maxine tells Rebecca the story of her brother Lyle Gruntenmeyer and when he returned from combat in WWII. This is Parker's retelling of what Maxine told her:

"In 1945, Lyle came home from the war, the only veteran to return alive to the small town in Iowa he'd left to go to the Western front. The day he arrived home, the whole town came out to meet him. When the train pulled into the station, the band played. Family and friends waved and cheered, and the mayor stood ready to greet him. But the man who climbed off the train was not the cheerful, high-spirited boy who had gone off to war. The man who climbed off the train was a ghost. In response to the music and cheers, he stared back, mutely. His blank face did not register recognition of anyone -- not his mother, sister, or friend.

They took [Lyle] home to the farm. He sat in the rocker in the parlor. He wouldn't speak, he wouldn't sleep, and he would barely eat. No one in that town knew what was wrong. They just knew that Lyle's soul was lost somewhere.

Maxine told me she decided to keep her brother company. Whenever she could, she'd sit in the parlor with him and talk. She'd tell him the news from the hardware store in town, or about the potluck at church, who was there, which dress each young woman wore. She'd tell him how the clean laundry had blown off the line and into the tomatoes that morning. When she ran out of things to say, she'd just sit with him quietly, snapping beans or mending socks. Lyle was like a stone. No expression on his face. Rocking.

It went on like this for days that flowed into weeks and into months. Then one night, late, after everyone else had gone to bed, Maxine was sitting with Lyle, quietly knitting, when the eyes in Lyle's still face filled with tears. The tears spilled over and began to run down his face. Maxine noticed. She got up and put her arms around her brother. Held in his sister's embrace Lyle began to cry full force, great gusts of sobbing, and Maxine held him. Then he began to talk. He talked about the noise, the cold, the smoke, the death of his buddies. And then he spoke of the camps, the mass graves, the smell. He talked all night. Maxine listened.

When the morning light came across the fields, she went to the kitchen and cooked him breakfast. He ate. Then he went out and did the morning chores.

Maxine touched her Bible. "Weeping may endure for the night, but joy comes in the morning."

Memorial Day is a day for remembering. Remembering the ideals on which this country was founded, ideals of equality, freedom, ideals worthy of sacrificing for. Remembering those who have lost their lives in the service of these ideals. And remembering just how awful war really is, for everyone who participates.